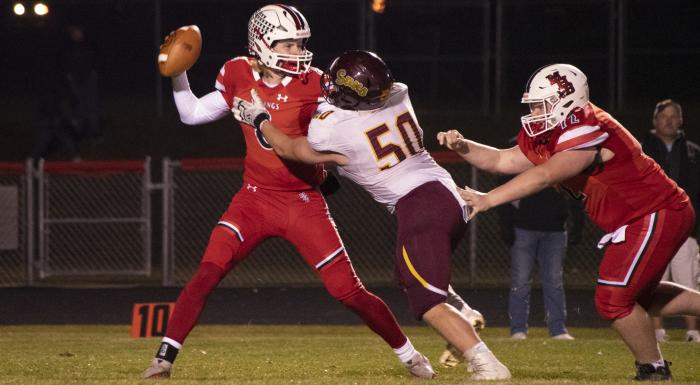 After all the season-ending hugs had been shared, the words of positivity, support and reflection from coaches delivered, Mason McNally began a long solo walk out toward midfield last Friday night and laid down on the patch of grass where he’d just played his final game.

Helmet off, he gazed into the blackness above and worked through the emotions of a game where little went right — a defeat that brought a premature end to a season in which the Mount Horeb-Barneveld football team had tilted so much of the action in its favor.

Amid the disappointment of unfulfilled ambitions, he was struck by a sense of anticipation. As one of just nine seniors in a program that has resurrected its fortunes over the past two seasons, McNally was already looking forward to seeing what the Vikings can accomplish in 2023.

“Obviously we didn’t want this to happen, but I feel like the younger guys have been shaped and have seen what could happen. When I saw them walking off this field, they looked hungry. So, oh man, watch out next year,” said McNally, who overcame a knee ligament strain in the season finale against Portage to get back into the starting lineup at left guard for the postseason.

“I’m so excited for them. Each senior class keeps setting the bar even higher. Hopefully next year they can go all the way to Camp Randall. And I’ll be there like a proud father.”

That unselfish perspective cushioned the blow for an MH-B team that for the second straight season checked out of the playoffs with a loss on their home field.

In command for much of the game, third-seeded West Bend East delivered a powerful, 19-point knockout blow in the fourth quarter to cruise to a 36-13 victory over the second-seeded and host Vikings in a WIAA Division 3 Level 2 playoff game.

Cutler Schmidt scored two of his three rushing touchdowns in the final period and backfield mate Colton Kress added another for the Suns (9-2), who racked up 353 yards on the ground to advance to a state quarterfinal matchup against top-seeded Monroe.

MH-B (9-2) hadn’t faced a power-based run game since absorbing a 40-19 loss to the Cheesemakers back on Aug. 26. Since then, the Vikings rattled off eight straight wins on the weight of their potent spread offense to claim their second straight Badger Conference Small championship – including their first outright title in 20 years – and first WIAA playoff victory since 2018, an opening-round domination of Stoughton.

The Vikings knew they were in for a difficult challenge in facing West Bend East, an exotic matchup from the power-based North Shore Conference. What they didn’t expect is that the game would tilt in the Suns’ favor from the outset, allowing them to stay eminently comfortable in their ground-and-pound offensive philosophy.

East called just four passes for quarterback Peyton Fountain on 26 first-half plays and two of their first 17 after the break.

“Can’t win them all,” said senior linebacker Eli Krantz, the emotional leader of the defense, who played through a broken right hand for the second half of the season with the help of a bulbous cast. “Going to have some good nights and bad nights, and I guess tonight just wasn’t our night.”

Nor did MH-B expect that an offense that averaged 38 points during the winning streak would be throttled almost completely. East limited the Vikings to just 1 yard total and 7:06 time of possession on five first-half series, didn’t allow a first down until the 5:25 mark of the third quarter, forced Vikings quarterback Kasey Helgeson into three interceptions, and held MH-B to its lowest scoring output of the season.

“We just couldn’t establish any offense in the first half,” MH-B coach Bret St. Arnauld said. “We were putting ourselves in bad positions — penalties here, negative-yardage plays because we missed a block – whatever could happen, happened.”

For all those telling stats, you could argue that three kicks turned the game and led to MH-B’s playoff boot.

The first was a magnificent punt by East’s Peyton Fountain after the game’s opening drive stalled near midfield thanks to a timely and well-executed run blitz by feisty MH-B linebacker Tyler Buechner. Fountain steered his kick away from Buechner, a dangerous return threat, and the ball rolled all the way inside the Vikings’ 1-yard line.

Junior running back Trenton Owens went nowhere on two carries against a Suns defensive front loaded against the run. On third down, MH-B went to a bread-and-butter play, a slant to junior L.J. Ellestad.

But Helgeson’s throw was behind Ellestad, who got his trailing hand on the ball and popped it into the air — right into the arms of Suns linebacker Kasey Gish, who waltzed in for an easy pick-6 and a 7-0 lead with 7:14 left in the first quarter.

“It wasn’t a great throw,” Helgeson said. “It was a bit of a miscommunication between me and the wide receiver. Once the ball got tipped, it was a pretty easy walk-in score for them.”

MH-B went three-and-out on its next series, and the Suns responded with a seven-play, 75-yard drive capped by Schmidt’s first score of the night — a 47-yard dash to daylight through a huge gap in the heart of the Vikings’ defense for a 14-0 lead with 2:41 left in the opening quarter.

“Over-pursuit,” St. Arnauld offered as analysis for the breakdown. “He’s not even their featured back. We were diagnosing the play, but we ran past the gap and missed what we had to fill.”

MH-B forced punts on East’s next two series, but the Suns consumed the final 5:49 of the first half with a 12-play drive that concluded with the second pivotal kick of the night – a 32-yard field goal that Josh Stehly floated just over the crossbar as time expired, forging a three-score lead at 17-0.

That margin came into play in a calculation St. Arnauld made later in the game, following a pair of impressive stands by the MH-B defense and the Vikings’ lone meaningful drive of the night.

First came a stop of workhorse running back Colton Kress on fourth-and-2 at the MH-B 34-yard line midway through the third quarter, with Krantz shedding a block to take him down. The Vikings responded by moving the chains for the first time, with Owens finding space on the left side en route to a 7-yard gain.

A holding penalty on the next play resulted in another punt, but MH-B got the ball back two plays later when sophomore linebacker Zach Maguire punched the ball free from Fountain and junior linebacker Drew Preimesberger recovered at the East 49-yard line.

A scintillating 33-yard run from Owens through a maze of defenders gave the Vikings a first-and-goal at the 4. But an injury timeout to tend to Suns cornerback Nate King gave East’s defense the pause they needed to stonewall MH-B.

Owens gained two yards on first down, Buechner grabbed another yard on a double-handoff from Owens, and Owens was held in place on third. Helgeson’s pass to Clay Utt on an abbreviated fourth down sprint-out was off the mark, turning the ball over on downs.

Again, the Vikings’ defense stepped up, producing a three-and-out that gave them the ball at their 44. Spotting a mismatch on the perimeter, Helgeson went to sophomore receiver Chris Kiel four times in a row. They connected on completions of 19, 8 and 11 yards to set up a double-move route that fooled the defense, with a wide-open Kiel hauling in a 12-yard score to draw MHB within 17-7 with 8:52 left.

Acknowledging the need for the Vikings to produce two more scores — and East’s ability to chew up clock — St. Arnauld elected to attempt an onside kick. Ethan Tranel’s squib produced a tailor-made high bounce and two MH-B players got a hand on the ball, but it landed out of bounds to give the Suns possession at their 43.

“We were inches from getting that onside kick,” St. Arnauld said.

Facing third-and-2 at the Vikings’ 49 on the first set of downs, Schmidt struck again when the MH-B defense overcommitted, sprinting through a massive void in the middle of the field for another TD and a 24-7 lead.

Helgeson found Tranel for a 22-yard reception on the ensuing drive to take MH-B to midfield and create promise for a much-needed, quick scoring drive. But on the next play, he left his downfield heave toward Ellestad too close to the hash, and East’s Owen Carlson had an easy interception.

Two plays later, Schmidt delivered the dagger with an electric 65-yard dash, eluding two defenders and outracing a third to the pylon for a 30-7 advantage with 6:33 remaining. Kress added a 5-yard touchdown on the next drive and Tranel closed out the scoring by hauling in a 30-yard touchdown pass down the seam from Helgeson as time expired.

“I had lots of hope going into the fourth quarter – so much hope,” McNally said. “Once that clock hit around 2 minutes, I was like, ‘OK, let’s get back to reality here.’ ”

Afterward, St. Arnauld expressed his gratitude to the program’s seniors, who were eighth-graders in his gym classes when he arrived in the district: McNally, Krantz, Tranel, Buechner, Utt, Caleb McNamer, Mason Weaver, Garrett Waefler and Dane Sickler.

“I was proud of the boys – and especially these seniors, for everything they’ve done,” St. Arnauld said. “It’s fun to see how much they’ve grown these past four years ... and it tugs at my heartstrings.

“I reminded all the kids that this time is short. You’ve got to appreciate every minute you’re on this field, because it goes by quickly.”

Mount Vernon’s Iron Man
In the belly of a workshop overlooking Donald Park’s tawny, windswept marsh grass in Mount Vernon, a fire is blazing. In the red mouth of the forge, rods of steel begin to glow a deep orange, growing...
The Salon offers stylish service...
A corner spot in the old Mount Horeb Opera House has been transformed into a baroque-yet-modern boutique salon where customers can get their hair cut, colored and styled. But The Salon, located at...
Giving Trees will help hundreds in Mount Horeb
It’s that time of year again... The Mount Horeb Giving Tree works with the local community to bring gifts to low-income children, disabled adults and senior citizens. All who benefit live within the...
JG Development wins awards for both residential and commercial work
Local contractor JG Development was doubly recognized for its commercial and residential design and construction work. Vive Home Transformations, its residential remodeling division, was awarded a...
Youth Apprentice Spotlight
Student Name: Zach Peter   Area of Apprenticeship: Marketing   Place of Employment: Shoe Box   Mentor Name: Jill Adler   Goals/Plans after Youth Apprenticeship/Has this experience changed any of...