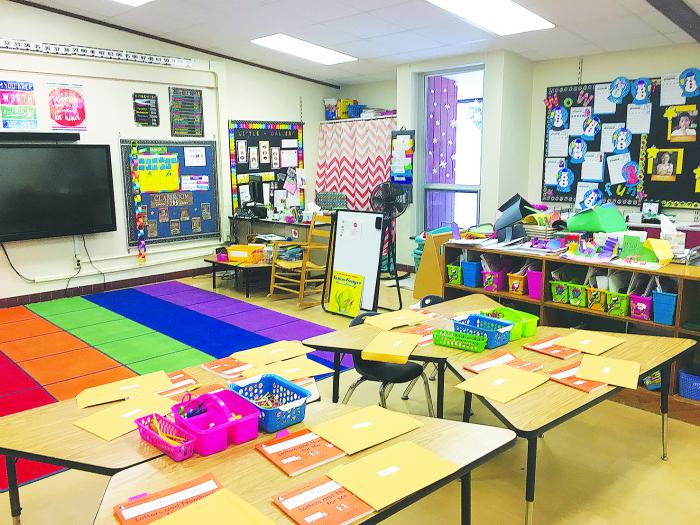 School board takes first step toward bringing young students back

The Mount Horeb Area School District’s recent debates about whether or not to allow some K-2 students to return to local classrooms covered vast terrain and encompassed myriad lines of thinking on both sides. There have been tears and impassioned speeches during meetings and barbed comments on social media. Parents, teachers and school members have all waded through the quagmire. One point in particular, however, seems to have led to confusion in the community.

At a recent meeting in which the board ultimately voted not to return young students to the classroom, superintendent Dr. Steve Salerno said officials from Public Health of Madison & Dane County (PHMDC) had informed the district that K-2 could be open, according to their recommendations. On that point, the newspaper received some questions from readers, so we went directly to the source. Sarah Mattes, communications supervisor for PHMDC, confirmed that their agency’s current guidelines allow – and have allowed since summer – for young students to attend school in person.

They suggest that older students do not yet return to the classroom due to the ongoing COVID-19 pandemic.

“We met the recommended threshold in August for K-2 schools to open,” explained Mattes. “We recommend that 3-12 remain virtual.”

Mattes then went into detail about some of the metrics being used by the scientists making the agency’s determinations.

“As shown in our school metrics table, in-person school reopening recommendations are different from in-person school closure recommendations,” Mattes continued. “At this time, if Dane County surpasses 54 cases over a 14-day average, PHMDC will review data and make a determination of whether a county-wide closure of in-person classes is recommended (if schools are required to be closed, this will be determined by DHS).”

This would be based on several factors, including but not limited to: number and trend of positive cases, extent of exposure and contact tracing capacity.

“While we’re currently seeing concerning data trends in Dane County and throughout the state, including increased community spread and increased hospitalizations, we are not seeing strong connections to in-person school environments,” Mattes said. “It’s important to note that many Dane County schools only have K-2 open for in-person instruction at this time and are reopening schools in a phased manner, per PHMDC’s recommendation.”

“Starting with grades K-2 is a way to carefully minimize risk of exposure that is supported by science and starts getting youth back to in-person learning,” she concluded. “We will continue to monitor for clusters in schools, but based on this current data, PHMDC is still supportive of allowing K-2 in-person at this time.”

The Mount Horeb Area School Board met again on Monday night this week. At that meeting, the board voted 5-2 to amend its gradual re-opening plan to allow administration to bring specific grade clusters – in this case K-2 – back into the buildings, in accordance with PHMDC’s recommendations.

“We’ve heard a lot about how we need to listen to the scientists,” said school board president Rod Hise.

“We’ve been talking about scientists and epidemiologists and it makes no sense [to ignore their guidance],” he added.

The board voted 5-2 to allow the administration to re-open some classrooms in accordance with public health guidelines.

“It would be my goal to return students back to school on November 16, if of course [all public health metrics are met],” said superintendent Steve Salerno earlier in the meeting. The district will be reaching out to families, likely at the end of this week, to garner updated feedback regarding interest in an in-person learning option. A virtual option will remain in place for all students who chose it.

The two dissenting votes came from Leah Lipska and Kimberly Sailor, both of whom have adamantly opposed allowing students back into school buildings.

While parents at prior meetings were heavily on the side of allowing an in-person option, those who spoke on Monday provided opinions both for and against it. In recent months, most parents who spoke to the board expressed frustration and despair regarding online classes and their negative impact on children. But Brittney Schultz said she was “really disappointed” that the school board was again considering in-person instruction. She called the current, virtual program “hugely robust” and “equitable.” She went on to say children have adapted and “this may now be what our world looks like.”

But Jim Myers, who has three children in the district, urged the board to allow young children to return.

“Tonight, you can show this community that you believe our district leadership is capable of carrying out the guidance set forth by Madison Dane County Public Health,” he stated.

“The experts believe it is safe to return,” he continued. “Tonight you can demonstrate to our local childcare centers and home learning pods that they are not in this alone. Tonight you have the opportunity to tell the students of MHASD that you hear them, and that in light of the new information and guidance you are willing to act in their best interest and change your course of action - no matter how difficult it may be.”

“I am hopeful that tonight you can restore hope and faith in this community by making the decision to follow the guidance that our local public health experts have set forth,” said Myers.

Melissa Olmsted, a teacher in the district, spoke on behalf of the MHEA teachers union, which has opposed a return to in-person classes.

“Staff would like to continue to be a part of solving this dilemma; when we work together we can accomplish great things,” Olmsted stated.

She went on to question why public health officials are in favor of in-person classes given the current number of COVID cases in Dane County.

“We would like to be back as much as the students and obviously, their parents,” she said. “It would be easy to assume that the best thing for education right now would be to just get back to normal.  Rushing to get back to school isn’t going to change the fact that in Wisconsin, we are the hotspot of the nation.  It is in nobody’s best interest to risk lives in an effort to try to go back to normal. Right now, things are not normal.”

“One of MHEA’s biggest concerns with bringing students back is our staff who have health issues or those who have household members with compromised immune systems,” Olmsted said. “Rather than allowing them to take a leave, we urge the district to find a way for them to teach virtually. Our staff wants to teach, they do not want to take a leave of absence. We love our students and hope the district can find a way for our staff to continue to teach.”

Lastly, Olmsted alluded to the current effort to recall school board member Leah Lipska, who called the meeting this summer at which in-person classes were initially cancelled and has continued to oppose re-opening schools. As part of the recall effort, local citizens obtained transcripts of online conversations between Lipska and some teachers prior to her votes, which they believe showed she voted in the interest of the union rather than in the best interest of students. While those conversations are classified as open records under government transparency laws and are legally available to the public, Olmsted said sharing them has sown division in the community.

“Sharing these emails that were written to the full board with the public is doing nothing but spreading hate and division in our community,” she continued. “Mount Horeb should have no place for that. That is not the Viking way.”

Gleanings
120 Years Ago- June 20, 1901 Dr. Sholts sold his fine carriage horse last week, realizing $225 for the animal, which was a beautiful one. A whole hayrack load of young folks spent Sunday on the...
Taste of Mount Horeb block party returns
Save the date for the second ever “Taste of Mt. Horeb” community block party. Organizers held the inaugural event in June of 2019 and are excited to make it even better this year. They are partnering...
Historium wants seed stories and artwork
The Driftless Historium wants your seed stories and artwork! Grades K to 6 can take part by checking out the Driftless Seed Project Busy Book; visit mthorebhistory.org and search «Driftless Seed...
Recreation Notes
YOUTH SOCCER COACHES NEEDED! If you are a high schooler and need more silver cord hours, we got a great opportunity for you. Starting the week of July 12 and running for 5 weeks will be a youth...
Blood drive is June 18
The next Mounty Horeb Community Blood Drive will take place at Evangelical Lutheran Church, 315 E. Main St., Friday, June 18, from 1:00pm to 6:00pm. For an appointment call 1-800-RED CROSS (1-800-733...